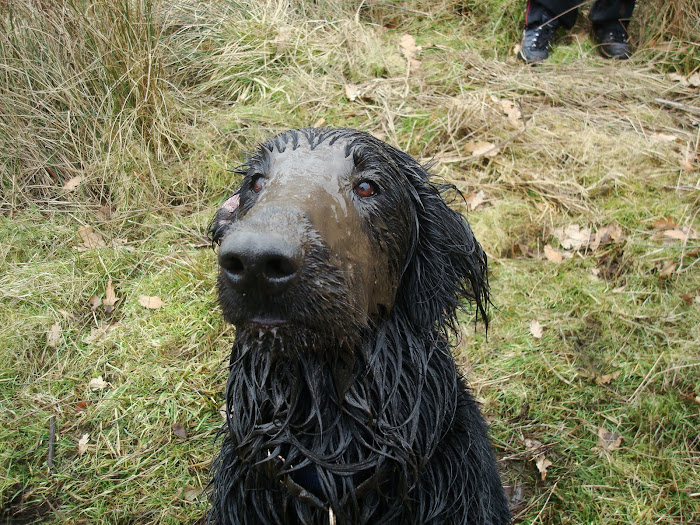 We have now been totally raw for 5 days. I am amazed I have made it this far without some sort of nervous breakdown!

The dogs had their first chicken wings on Sunday. What a totally nervewracking experience that was!!! I held onto the wing and they happily crunched their way through them, so far, touch wood, with no ill effect! Since then they have also had a chicken neck each, which they loved! I held my breath until they had finished them. :-)
At the moment they are having chicken mince from Prize Choice as one meal (mixed with a variety of veg/fruit and somewhat controversially, oats.) For the other meal it is more veg and oats and either fish with raw egg, shell included, or some sort of bone, be that chicken wings or neck. Some of their mince has tripe mixed into it. They are also having tumeric (which apparently protects from cancer), garlic (anti flea) and thyme (good for the lungs). Today their heavy duty supplements arrived, some vitamins/minerals and 3:6:9 fish oils, both products from Higher Nature. I have also added Extra Virgin Olive Oil into some of their meals.
Meanwhile I have devoured 2 raw feeding books!!! :-)

So...where do we go from here (apart from more grey every time I hear them crunch on a bone?!! :-) )
Tomorrow I am introducing a different protein source in the shape of turkey. I intend to do one a week until I know what they can and can't tolerate. We also hope to get a knuckle bone from our friendly local butcher , the same place as we have sourced the chicken necks for an amazingly good 50p per kg!! I hope, within the month to not be talking about what they are eating all the time and to not panic whenever I give a bone...fingers crossed.

In the last week I have to say I think that their coat condition has improved, they were always shiny, but I genuinely think they are more shiny and soft. Their poos are less bulky..well just less really, less of them and without a doubt nowhere near as whiffy. Their energy levels are about the same I think, but there is a sparkle in Tango's eye that I have not noticed before.